Fireworks Permit Issued for The Point: Santa Clara Code Enforcement officer has issued a Fireworks permit to The Point, located at 222 Beaverwood Road, Santa Clara.    These are PRIVATE fireworks to be held on July 3, 2022 at 9:30 PM.

Santa Clara is a town in Franklin County, New York, in the Malone metro area. The population was 395 at the 2000 census. Population in July 2007: 396. Population density: 2.2 people per square mile.

The Town of Santa Clara is in the southwest part of the county and is southwest of the Village of Malone The town is within the Adirondack Park. It includes the 58 ponds of the Saint Regis Canoe Area, presently the only Canoe Wilderness Area in the park, as well as most of 4,700-acre (19 km2) Upper Saranac Lake.

Formed from part of the Town of Brandon in 1888. The Town of Santa Clara, the name, was derived from the wife of an early town businessman, John Hurd. An addition from Brandon was added to Santa Clara in 1896.

William Rockefeller began buying property in the town around 1896 in order of establish an estate, used by members of his family during the summer.

Communities and locations in Santa Clara

Bay Pond -- A hamlet in the south-central part of the town. It was a former Rockefeller summer home.

Brandon -- A former community, located north of Bay Pond. It became part of the Rockefeller estate and its buildings were removed.

Everton -- A former community abandoned after the forests had been stripped.

Floodwood -- A hamlet west of Saranac Inn near the west town line.

Kildare -- A hamlet west of Saranac Inn near the west town line.

Madawaska -- A hamlet near the east town line.

Madawaska Pond -- A lake near the center of the town.

Middle Saranac Lake -- Part of the lake is in the southeast corner of the town.

Meno -- A location northeast of Madawaska.

Santa Clara -- the hamlet of Santa Clara is near the west town line in the northern part of the town on NY-458.

Saranac Inn (also "Upper Saranac") -- A hamlet in the south part of the town.

Upper Saranac Lake -- Most of the lake is in the south part of the town.

Weller Pond -- A large pond in the southern part of the town. 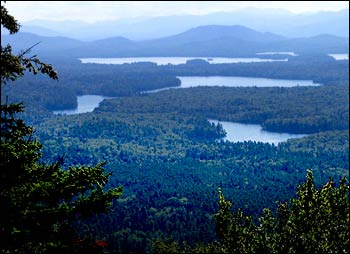 View from Long Pond Mountain of waters of the St. Regis Canoe Area
(with the High Peaks in the background).
Taken by Mwanner

Santa Clara is rated amoung the top fishing waters in Franklin County for Trout and Pike.

Please note when trout fishing the above ponds, use or possesion of bait fish is prohibited.